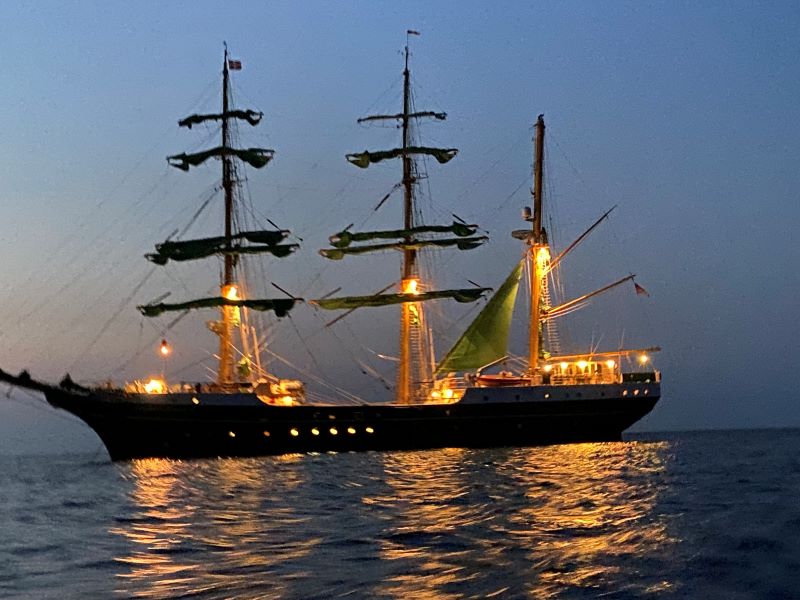 Today everyone was woken up at 7 by the song that plays every morning when anchored. During breakfast we were informed (though everyone already knew) that we would have sail-training today, we have been anchored due to unfortunate wind direction, and the plan was to make a manoeuvre which would teach us something about tacking, brassing and would allow us to climb onto the yards making most people excited for the day. At 10:00 we lifted the anchor and at 14:00 we started the manoeuvre. During the training most of the sails were set, except for the royals. It went mostly well but because we didn´t have a lot of speed we couldn´t do the manoeuvre as fast as we wanted making it a little messy. Luckily we have enough hands as the ship is full of as many trainees and trained crew as possible making sure we had a group of people for everything that needed to be done who were told where to go and what to do in preparation. The first time we tried tacking, the manoeuvre didn´t go very well but the second time we succeeded, and at 17:00 the 4-8 watch and a few others took down the sails and the engine was turned on, at 19:00 we were back at the anchor position in Albek bay. It was the biggest manoeuvre we have done so far and it was really interesting to see how everyone worked together to make it happen and how at the end, when the sails were set, the ship was doing what we were told it was going to do and how beautiful it looked with so many of the sails up. I have the 0-4 watch and this was one of if not the most tiring and eventful watches so far though it felt like it flew by. At the end I was glad to sit down and have a cup of tea with the friends I have made here and relax. We didn´t have watch in the night because we were anchored so we could finally sleep a whole night, except for the people who had anchor-watch, which is luckily only an hour. After dinner (which is breakfast! It’s bread and cheese and stuff) I played some card games in the duty mess, as the regular mess was very full, which was a really nice experience, multiple times people walked in to get some pillows or see what the noise was about, and decided to stay and play some games too. At about 10 in the evening I called my friend which was a very good idea because it made me less stressed to hear his voice and talking to a friend always takes away some stress, which is -of course- very nice. What I dislike about my experience here is that I hear and talk either German or English almost the entire time, now this isn´t a surprise as we´re on a German ship with German crew and mainly German trainees. That doesn´t take away from the fact that it´s tiring and a little frustrating at times. On the other hand, I´m glad I get to improve my German in a fun way that doesn´t involve schoolbooks and goes much faster than in school. My favourite thing here though is the people I´ve met who I in other situations would have probably never befriended as we´re quite different but this shared experience gives us an easy access to a strong bond that I´m incredibly happy to experience. In short: today had nice weather, lots to do and no seasick people, a pretty good day!