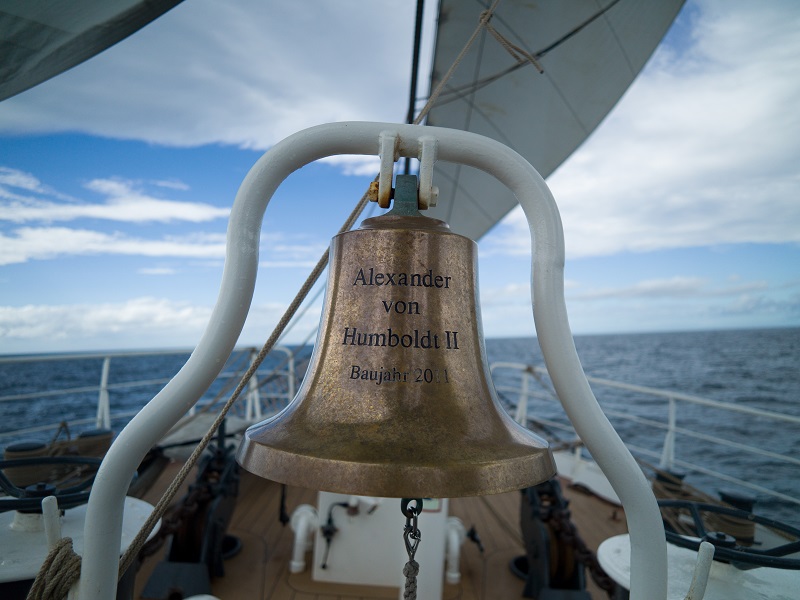 „Make new friends, and keep the old, some are silver and the others gold“
This traditional round, or canon, was a song I knew and led the crew to sing at the captain`s
dinner aboard the Alexander von Humboldt II, affectionately known as Alex II. The formal dinner is
the culminating event on board each of the legs, or voyages, of this Bremerhaven based German sail
training ship. The fully rigged ship belays the state of the art vessel (2011) beneath the distinctive
green sails. This affords the crew the luxury of hot showers and clean, well ventilated berthing and
common areas. Each four-person cabin has its own porthole and a bathroom with shower. Mariners
who may feel this life too comfortable need only walk passed the fully stocked bosun`s locker and
catch a whiff of pine tar to know this ship has a firm grounding in traditional sail craft. Routine tasks,
as on most sail vessels, include domestics, sanding and oiling blocks, lubricating moving parts, sail
repair, deck wash, mob, fire and safety drills, as well as training in celestial navigation, chart plotting,
and meteorological science. The comraderie of this volunteer crew comes forth in the speeches and
songs they share at the dinner in recognition of each of the watchleader.

Our 12 to 4 watch was led by Maarten, a young Dutchman pursuing a career in the maritime
industry. His previous experience on board has earned him this new position of guiding guestcrew,
returning volunteers and trainees. Balancing the needs of the ship while underway with the diverse
watch members ability levels was handled with humour, patience and three languages!
Two of our crew watch members have been sailing with the Alex II for over three years, and
met on board. Their mutual love of sailing led them into a relationship and shared vacations sailing
with the crew. They have a solid grasp of the workings of the rigging and life on board that they
freely share with the guestcrew and trainees.

Another two members of our watch, Udo and Ralf, joined the Alex II after serving on the
German naval sailing ship, the Gorch Fock, which gave them a taste for tall ship sailing. This is the
second voyage on Alex II for each of them. They have been able to add their considerable knowledge
and expertise to our watch, including accurate helming across rough seas with gusting winds, keeping
a sharp lookout and even accompaniment on the accordion during watch and at the captain`s dinner.
Two of our watch are guest crew. This includes myself, a retired teacher from California and
Sami, a tall ship enthusiast from the United Kingdom . My experience has been quite diverse, and on
replica ships of yesteryear, sailing in American waters. Sami has had a 55 day transatlantic voyage on
a ship that enables differently abled individuals the chance to sail on specially outfitted vessels. Our
previous square rigged experience made it somewhat easier in learning the German vocabulary for
the sail handling manouvers, though our watch leader and several officers were fluent in English and
able to translate significant instructions.

There is much to be said for a modern ship, with traditionally rigging. The well-maintained
infrastructure allows for optimal hands-on skill building with knowledgable leaders in sail theory as
the captain, Bärbel Beuse, her well-researched volume of sail theory is a must-read for all serious
practitioners of square rigged sailing vessels. Her face glows when the wind allows for new
applications of sail arrangements to meet the current conditions. Today as we departed the lee of
the island of Fuerteventura, conditions were perfect to set 17 of 24 sails, much to everyone`s delight.

The watch team was rounded out with two young people. Peter had been on a voyage
before, and planned to return sooner but had a bicycle accident that postponed his trip until this
month. He definitely has the passion and commitment to becoming a long-term volunteer and leader
in the organisation. Christina made her maiden voyage on our square rigged ship after planning the
adventure for 6 months. Her careful research had her well prepared in gear and attitude. As a
passionate sailor, with a background in small boat sailing on lakes, she wanted to move up to the big
leagues. She has been bitten by the Green Frog.

Along the journey around the many Canary Islands, our ship found harbour in the historic
town of St. Cruz de La Palma, as well as the port of Gran Tarajal. The time ashore was a treat for
weary sea legs. Many locals and tourists stopped by to learn about the green machine.
This particular journey allowed us to see the transit of the moon in several phases, given our
watch was from midnight to 4 am. The spectacular Geminid meteors showers filled the sky with
shooting stars through our December voyage. Other highlights of our watches included being
followed by dolphins as we unfurled the bowsprit sails, entering new ports, and singing traditional
tunes and modern favourites played on the aft deck by Tom, our knowledgeable watch officer and
musician skilled to ukulele, accordion and guitar.

The Alex II songbook had a dining room full of mariners singing with raucous abandon long
into the night, with the rolling of the ship and the clink of Beck’s bottles we were rocked to sleep
with fond memories of a wonderful voyage and new friends.