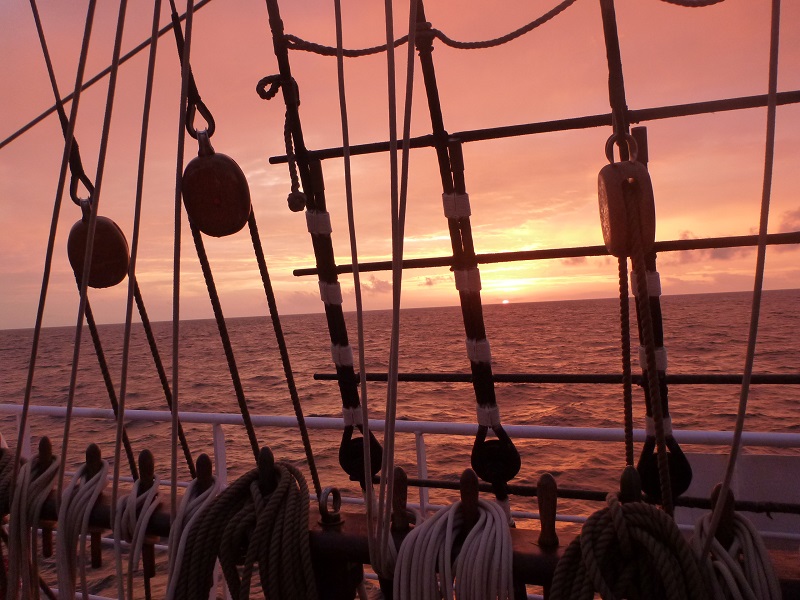 Misty mountains rose from the sea on each side of us as I stood at the helm during my early machine watch. The rugged Scottish landscape is lovely even through mist and fog, which is good because that’s the only way we’ve seen it.

Muted sage and dove and pearl tones grace the landscape over the slate sea, peacefully sliding by to the soothing pitter patter of rain. They say there’s no bad weather, only bad clothes, and snug in my foul weather gear I see the truth in that. The trick is to keep the hand on the helm angled down so the rain can’t drip in your sleeve.

Bernhard, our head cook, is practically singing in the kitchen. There’s a general air of excitement throughout the ship, even so early. At 10 some of us began to gather on the foredeck as our destination of the day came into view.

we made really great time across the North Sea- I’m sure you saw in a previous log, at one point we were doing more than ten knots under sail. (I was at the helm then too, braced against the sharp heel of the deck – it was awesome!) We made such good time that we can now make an extra stop, in Scotland, on an Island called Islay. Perhaps you’ve heard of it? Bernhard certainly had, I think it was his suggestion in the past that Captain Mike remembered.

Islay is famous for their export- Scotch. We dropped anchor off the best distillery, Bunnahabhain, and after lunch shuttled the crew to land where we were welcomed and given a tour and a tasting. This distillery is the third youngest on Islay and it was founded in 1881, and continues to work to produce the best Scotch with the best practices for the island as well as for their business.

Ashore in Scotland for the first time, I made the most of it. In addition to tasting peaty scotch I got my feet wet hiking nearby on peaty ground and rocky shore, and up the road a little for the view. As I set off I heard a family visiting the distillery admiring the Alex II, their young son thrilled to see a ‘‘pirate ship.“ Outside the distillery you could smell sheep but couldn’t see them. Streams and little waterfalls were all around and all the color of coffee from the peat the rain water filters through. If the sun were out we’d be able to see the fresh brown water mix with the peacock salt water we were anchored in, out on the edge of where the current rips through Islay Sound.

It was a mellow and happy crew that returned a few hours later- all pretty sober as we had to climb the boarding ladder back into the ship- but several of us returning with far heavier rucksacks. I was glad of a hot shower and hot coffee after our little adventure.

Besides visiting exotic locations, one of the great joys of ship life is getting to know new and interesting people. In the evening around the ship we drifted into smaller groups, enjoying one another’s company. Those doing the fire walk as part of their night watch duties found laughter and contentment throughout the ship, our own little warm and glowing haven in the damp Scottish night.