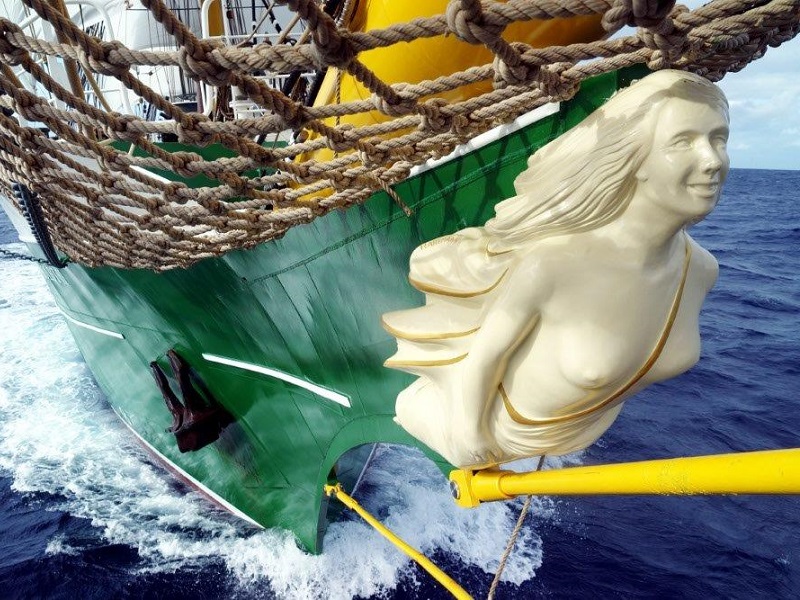 With a fair wind whipping up whitecaps in Limfjord we departed Aalborg entirely under sail, a feat which is not always possible and in fact was not attempted by none of the other Class A ships.

Crossing the gangplank onto the Alex II is a homecoming for a returning sailor. The time you were away disappears. After such an enchanting first voyage during 2018’s race from Sunderland to Esjberg, I was worried the reality of the Alex II would not live up to my memories. Happily the Alex II remains a bridge connecting countries and peoples for this American, which I’m sure would please the ship’s namesake, Alexander von Humbolt, who said something similar about the sea.

Better still, upon returning I have found that many parts of ship life are sweeter with familiarity. As the crew change was completed on Friday we set about our orientation and safety training. Even as I listened to the announcements in German I found I could mostly understand what was said by the key words and memories of last year, and the gaps were filled in by a new friend.

That night I enjoyed Aalborg’s magnificent fireworks from the top the wheelhouse, surrounded by shipmates new and old. The show itself would have been impressive in any setting, but combined with the city skyline, the incomparable grandour of all the ships berthed along the wharf on each side of the fjord, the hundred smaller vessels (including a few unconventional party rafts) filling in the middle, and the last colors of the sunset the spectacle left you wholly satisfied to be a part of it.

The morning of the sail parade found us loading water and other provisions in a drizzle. Once we had everything aboard it was back to safety training, then we stowed provisions and did my favorite training- laying aloft. The sun came out as we climbed to the yards to unpack the sails, and almost before I knew it we had cast off and were setting a course down the winding channel to the Baltic.

With a Sieben-Drei-Eins for Aalborg, we worked to set the sails. Inbetween hauling you could see the rolling countryside slipping by and spectators camping on the shore. The sun came and went but while it was out it gilded the entire vista, the parade of ships stretching out ahead and behind.

This trip’s group of trainees has some experience, and this combined with the strong leadership of the crew left us quite pleased with our manouvers when we emerged into the Baltic several hours later. The rain came and went, but the wind held- and so we entered into the rythym of our watches at sea.